Camp - Part Two - The Drop Off


The following blog post is Part Two in my overnight camp series. For those following along - I am re-posting my camp series from last summer - figuring nothing really has changed... or has it?  ... Anyway - in case you missed Part One - click here. You may remember from last week's post, I started packing a little later than I should have. Well I finally finished - last night. My husband worked his magic and managed to get it all in the car: 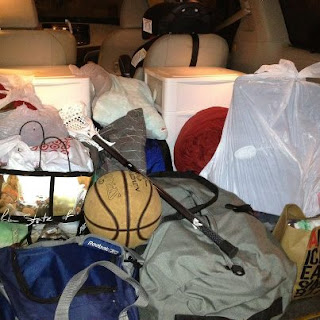 Before I tell you how drop off went, let's recap what happened last year:

So I managed by some miracle to get everything purchased, organized, labeled, and packed for my two oldest kids, in preparation for their month away at summer camp.

Today was the day we they had been anxiously awaiting – drop off.

This is the fifth summer we have done this. Not only do I have unpacking down to a precise science, but before we have even fully stopped the car, the kids are off and running, trying to find their friends. Parents who? In their opinion staying twenty minutes is staying about fifteen minutes too long. (Plus, my husband has Phillies tickets you know!)

But let me back up so you too can experience the madness of drop off day:

1. Packing the car (night before) & leaving at 7:30am.
2. Sitting in rush hour traffic - because for some reason, drop off is on a Wednesday.
3. Sitting in a line of cars at the gate of the camp waiting to get checked in.
4. Trying to find a parking spot close to your child’s bunk while trying not to hit children running in every direction.
5. Bed selection...

Ah the bed selection... now pay attention because this is important. The camp has a strict lottery policy so as not to penalize latecomers. The policy is that upon arrival to your respective bunk, each camper picks a number out of an envelope. Each number corresponds with a bed. Done. Sort of...

In my son’s bunk, they do pick numbers, but then... . Last year, I spent a decent amount of time unpacking and placing neatly folded towels and clothing on the shelf next to the bed my son picked. Within ten minutes, everything was balled up & thrown across the room to a different bed. This year, I left all the clothes still packed in the plastic bins by his assigned bunk. He is 13 – he can figure out where his underwear is (maybe) when he gets to his final destination. I did however, make certain he knew exactly where the already addressed and stamped blank postcards were, that he needed to write and send home.

The girl’s bunk works a little differently. My daughter wanted a top bunk. In fact, she all but declared that her entire summer would be ruined if she did not receive a top bunk. She also insisted that I pick the lottery number, because I successfully picked her a top bunk the last two summers. Oy the pressure! So I picked... a bottom bunk. The counselor took pity on me, told me the top bunks were odd numbers and then opened the envelope wide enough so I could see all the numbers and told me to pick again. I picked number 11 – shocking I know!

I successfully unpacked and organized everything for her in record time. We said our goodbyes.

On our way out, we had to stop to drop off my daughter’s allergy medicine with the nurse. The line was out the building – and so we waited in another line.

We finally made it back to our cars – almost two hours later than our projected time. It happens almost every year – but looking back at all the kids playing and laughing and hugging makes all the lines and craziness so worth it!

So what happened this year??  Well, much of it was the same, with one minor adjustment. We decided that we actually didn't have the be the first ones there this year, and decided to leave thirty minutes later. We still hit the same rush hour traffic, but there was no line to get into camp.


I'd be lying if I said I didn't have a moment of panic that we were there the wrong day, but all was good. We got parking spots right in front of the bunks, and both kids picked end bunks, so there was plenty of room to unpack.


Also - my daughter's allergies seemed to have calmed down this year, and we opted not to bring her meds, so we were able to skip that line as well.


For the first time in six years - we actually did only stay about fifteen minutes in each bunk before leaving and we were back home by noon.


I don't want to jinx anything, but that was the easiest camp drop off ever!


Next Installment: Part 3: Letters From Camp.  Last year, the final tally on letter writing was daughter - 4, son - 1 ... I'm expecting something similar this year, but you just never know... stay tuned!

If you have campers of your own, Baskets-n-Beyond now carries camp care packages!