Are you ready for some pirate fun? This week we are celebrating the release of David M. Brown's newest book A World Apart, a fantasy story set in the world of Elenchera,   a place where pirates roam. And while the pirates in this tale have a dark side to them,  pirates can be fun... at least in my fictional head. In real life, I'm sure I never want to run into a real pirate. But fun pirates are okay. You know the type I'm talking about - the kind of pirate you see in kid's books, on halloween, and even on (dare I say it?) the Wiggles  - they're not so bad. Now don't worry, I won't be posting any Wiggles videos... I love you all too much for that!! But, I do want to share with you my top five reasons why (some) pirates rock:

1.  They make great pumpkins - - this one was my then 4 year old's idea. Not only does he look good, but it saved us from having to fight with the pitiful knife to cut out the second eye! Arrrgh. 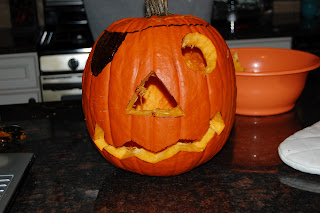 2. They have the best accessories - hats, beads, earrings, jewels, scarves, boots, and of course the eye patch. What more could a girl ask for?

3. When a pirate speaks, people listen. Perhaps that's the trick to getting my three kids to listen to me - I need an eye patch, and perhaps a sword - and a parrot so it can follow them around and repeat everything I've said over and over (oh wait - that's what I do already - it doesn't work...) Maybe I should invest in a plank.

(note: Photo was removed for possible copyright infringement - but let's just say it was a little Johnny Depp mixed with a little Pirates of the Caribbean... yup - you know what photo I'm talking about!!)

5. You get to talk in Pirate speak... In the words of Nate Rocks' Dad: "Shiver me timbers! Avast ye –– make way for the Hornswaggler! Gangway and hand o'er yer loot, or prepare to walk the plank!"


That's pirate talk for:  It's time to celebrate the release of David M. Brown's argggh-some new book: A World Apart. So enough about me... let's get right to it!

Demetrius makes his first mistake when he lets his best friend Halcyon marry Eleyna, the love of his life, without saying a word. On the day of the wedding, he walks away from the Elencheran town of Dove's Meadow and joins the army. He makes his second mistake when the pirate Black Iris tricks him into letting dozens of men, women and children die in a fire. Demetrius is imprisoned in grief and disgrace. But he can atone. The Black Iris is dead. The Ivory Rose has risen to the top of the pirates and is leading brutal raids on the coast. If Demetrius can capture and kill her, he'll win his pardon. And then Demetrius discovers the Ivory Rose is Eleyna. He must decide which will be his third mistake: losing his last chance at a pardon, or destroying the one woman he's ever loved.

Here's where you can pick it up:

You can also win a prize just by helping to spread the word!