Mom vs. Football: Stay Away From My Baby! 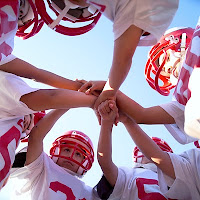 Yesterday, my oldest son played in his first middle school team football game. Well technically it was just a scrimmage, but the fact remains that other bodies were going to be slamming against his. He was excited – I was nervous.

It took me a long time to even agree to let him play football. Yes – I’m that Mom. But I had good reason. Four years ago, my son went snowboarding for the first time. He came home with not one, but two broken arms. It’s one of those things I’d rather not have to go through again. But I know it’s unfair of me to want to keep him in the house – preferably wrapped in bubble wrap. So my first baby joined the team and started training.

Now I use the term “baby” loosely. My nearly fourteen year old is 6’3” and 175lbs – way over the average size of every other player. My hope was that the other team would take one look at my child and decide not to go near him. That did not happen. But, in the end, he had fun, the team did well, and Mom gets to breathe easy for another week. Only six more games to go.