This past Sunday was one the day I had been looking forward to all week... camp pickup day! I definitely missed my two older kids and was ready to have them back home.

In theory, the counselors are supposed to have the kids all packed up and ready to go... in reality, it went something like this:

Once again we woke up early to hit the road. We had an hour and a half ride in front of us, and the gates opened at 9:00am. We got there around 9:30 and were thankfully spared of the 9:00 line of cars waiting to get in. Unfortunately, that meant there were few parking spots close to the bunks remaining.

The camp is shaped like a giant horseshoe. We arrived at the boys’ bunks first. I spotted my son right away in the gaga pit (no relation to Lady Gaga... just the name of some camp game I don’t understand). I felt a huge sigh of relief. Not only because it was great to see my son, but because I could actually *see* my son. Last year, he was nowhere to be found when we arrived – we finally found him hanging out in the girls’ bunks (yes – we actually did send him back to the same camp.)

When we asked if he was all packed up, he responded “sort of.” I cautiously entered his bunk (a) because I didn’t want to see the mess I still had to contend with, and (b) well after spending four weeks with twenty boys in one hot bunk, the air can get a little ...um... stinky. I was right on both counts. At this point, we just wanted to leave, so my husband shoved everything that was still out into any of his bags that had room. It was on to the girl’s bunk.

As we drove up the road to my daughter’s cabin, I had visions of her waiting on the steps, watching anxiously for us to arrive, and then running with arms wide open toward us as we parked the car. Instead, I found her hiding in the bathroom, tears in her eyes that it was time to leave. After many, many group hugs involving more teary eyed girls, she finally walked us over to her bed, where we discovered she had even less packed then her brother. We once again threw stuff randomly into bags and hit the road, to head home. 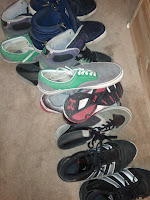 As fun as all that sounds – the fun for me really does not begin until we get back home. It is then when I truly realize the extent of what I like to call “camp stank.” Those of you with kids who go to overnight camp know exactly what I am talking about. “Camp stank” is the stinky, damp film that manages to cover every fiber of every belonging that your child has had with them at camp. I spend the next several hours of my day “de-stankifying.” Laundry, laundry and more laundry. Unpacking is always interesting. This year, I expected to find the usual stray sock or t-shirt that belonged to a bunk mate. Instead, in my son’s belongings I found not one, not two, but six pairs of sneakers. Six!! No, my son is not a thief. They are all his. However, I only packed two pairs. It seemed that Imelda sneaked (no pun intended) the other four pairs into his bags when I wasn’t looking. You are probably wondering why my thirteen-year-old son has six pairs of sneakers. I’ll save that for another post... For now I'm enjoying time home with my kids.
Posted by Karen Pokras at 10:16:00 PM