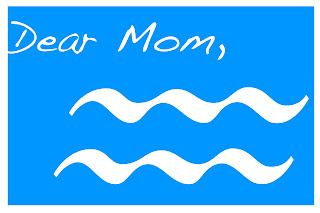 My kids have been at overnight camp for exactly one week. I’d like to be able to report that they are doing great, but I cannot... well – this is not completely true as the camp posts pictures on their website regularly, so I can at least see their smiling faces... but I’d much rather hear about it in their letters to home.

I’m not really surprised. The first year my son went off to camp, I received three one-sentence letters in this order: “I love you,” “I miss you,” and “See you soon.” These letters were in response to my regular pleas to him through my own letters to write home. I even gave him multiple questions he could answer in his letters should he be suffering from summer writer’s block.

His next summer, I was more specific. The instructions were to write at least three sentences in each letter – one telling me if he was enjoying camp, one telling me about an activity he enjoyed, and one telling me about the other kids. However, I failed to tell him how many of these letters I wanted, as I only received one letter.... two days after he was already home. I think it was that oh crap – it’s pickup day and I forgot to write home letter.

By his third year, he had much improved. I received three descriptive letters. We shall see what this year brings.

I was at least expecting a letter from my daughter by now. She set the bar for herself higher early on. Her first summer, I had a letter from her after just a few days. It was her first summer at camp, and I was anxious to hear if she was having a good time. Her letter said, “I miss you, send a folder.” Huh? Her letters got better as the month progressed and came every few days.

Last year (her second year) she continued to impress. In her first letter, she asked that I send her robe and slippers. Apparently my daughter had mistaken overnight camp for the Four Seasons Hotel. Perhaps she would like a mint on her pillow as well? However, my favorite letter from her came towards the end of her stay. After telling me all the great things she was up to, she ended the note with:

“P.S. Did you know that J (her older brother) kisses girls?”

Anyone want to place bets on when I get my first letter?
Posted by Karen Pokras at 7:30:00 AM