How To Grow A Spider

I was hoping to have this blog post coincide with Halloween – but you know how spiders can be. In the midst of putting together Halloween costumes, working on novel #2, a sick child, and planning a Bar Mitzvah, the number one thing on my mind these days has been spiders..it's true!

Now I admit, I am not normally a huge fan of spiders, although I have gotten better. After all, they do keep other bugs from getting into the house. But generally speaking, the thought of spiders does not excite me. 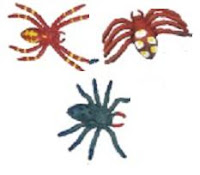 So when I opened the annual Halloween package from my Aunt and Uncle to find three rubber spiders, my first response was “yuk”. Upon further examination, I learned that these were no ordinary spiders. These were “growing” spiders – double yuk. Nevertheless, as any good mom would do, I decided to follow the directions and put the three spiders in a bowl of water where they would allegedly grow four times their size within seventy-two hours.

At this point, a strange transformation occurred. I actually became interested in these spiders – one may even say my interest bordered on obsession. While my children took a peek every morning when they woke up to check on the spider’s growth progress, I checked on the spiders every few hours. I made sure they had enough water, I turned them regularly so that the water touched them on all sides evenly as they grew, I took pictures, and I even moved them to a larger pan of water once they outgrew their original bowl.

Sure enough, after 72 hours of TLC, they reached their peak size. I was such a proud mama. But my job wasn’t done yet. According to the directions, once you remove the spiders, they are supposed to shrink back down to their original size.

Let me just interject that we are now five days into this little experiment, and my children have completely lost interest…but that doesn’t stop me. I lay out some paper towel on my counter and remove the spiders. The paper towel immediately becomes saturated, and I realize that these spiders would do much better on one of my plush towels. They sit nice and comfy for the next three days as they start to deflate. But then, I begin to think: Am I doing all I can do for them? Of course not! They need somewhere warm and cozy, where the water inside of them can properly evaporate. So I moved them to the best seat in the house: 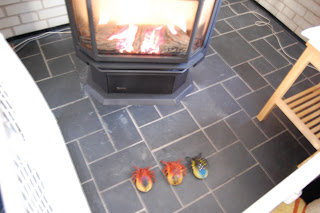 And now, I continue to wait to see what my little big spiders will do next.