Attack of the Tomatoes!

I blame the blizzard. Make that blizzards. I believe there were three this past winter, but I lost track somewhere along the way. We had over 70 inches of snow in total, the year before there was less than 15 inches. In addition to the snow, there were the incredible howling winds. Trees and power lines snapped at a rapid pace. Sadly, we lost two large trees. Several others were badly damaged and had to be removed as well.

In the spirit of re-growth, I decided to take advantage of my no longer shady backyard and do something I have wanted to do for years: have a vegetable garden! I have always enjoyed gardening and had a decent track record with growing a variety of flowers, shrubs, herbs and other various plants. However, when it came to vegetables, I seemed to have a brown thumb.

Every year, I would buy one or two tomato plants. Since the only semi-sunny spot in the backyard had been at the edge of the patio, I planted these vegetables in pots. Friends of mine had a lot of success with their potted gardens, so it seemed like the perfect solution. Every summer, it was the same story. The plants would get to what I considered a decent size, produce a couple of yellow flowers and then wither away without a single tomato.

This year however, I had a sunny backyard and a small patch of land itching to be tilled. I went to my local garden store without any knowledge of how to actually grow a vegetable garden. I decided I would try three tomato plants. Why three? I have no idea, other than I thought that 10 feet across would be plenty of room to plant three tiny plants. I chose three different varieties: heirloom, roma, and cherry. I planted each carefully, watered diligently and went out daily (sometimes multiple times during the day) to see if there were any signs of tomatoes.

After a few weeks, I was thrilled to see little green tomatoes sprouting on both the cherry and roma plants. I was even more thrilled when some of them turned red. I picked them all proudly and kept them on display on a plate in my kitchen. 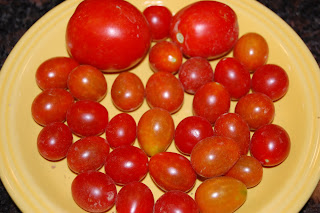 My harvest continued. about once a week, I would walk outside and fill a small bowl with a handful of cherry tomatoes. Occasionally a Roma would get thrown in. The heirlooms, were also starting to grow, but staying green.

And then... the tomato Gods must have decided I was a worthy farmer. It started with one or two heirloom and/or Romas every few days with a bowlful of cherry tomatoes thrown in. My cucumbers and basil were doing pretty well also. A lovely cucumber-tomato salad was becoming a nightly staple, with no complaints from my husband. I even had a few left over to give to our neighbor. We were in tomato bliss.

But then, as if in the 'I Love Lucy' episode where the candy factory conveyor belt starts moving in overdrive, the tomatoes went crazy. Every day, my husband and I both went out with bowls, picking red fruit off of plants that had grown as tall as us. We tried to give some away to anyone who showed any interest in taking them off our hands. 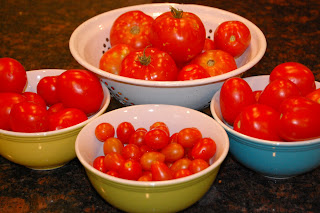 We ate tomato salads, tomato slices, and cherry tomatoes by the handfuls as if there were grapes. Not a dinner went by where tomatoes were not incorporated into the meal somehow or another. Canning was just too much work for me and out of the question. I finally went on Facebook looking for ideas. Salsa - of course! My friend Heather posted an awesome and easy (which was the key) recipe which I am happy to share if anyone is interested.

So today, I grabbed some peppers, onions and of course, TOMATOES and made my very first salsa - topped with cilantro from my garden. 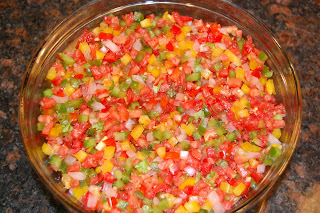