I Blame It On The Carpet

I was listening to a podcast the other day about social media, and a thought occurred to me. Lately I haven't been very social. There was a time when I was blogging two or three times a week. Looking back, I realized it's been about two years since that all stopped, which was just around the time of my divorce. Did you know that happened? Yeah.

It was a crazy, hectic, stressful, depressing time. To add to the stress, our marital home, which was too large and expensive to keep, sold in two days, and the buyers wanted a quick settlement. I had five weeks to pack up and find a new home for myself and my three children.

In the housing market, it was a time of low inventory and high demand … at least in my price range. I was getting outbid on everything and had visions of us living out of my minivan. But then in a very "Sex in the City" sort of way, I got a phone call from my best friend: "A guy on my street died. They're hammering in the For Sale sign as I speak. Call your realtor NOW."

So I did. And I got the house before anyone else had a chance to see it. I had already been through two other houses in the neighborhood. They were all built in the 1950's and all basically the same. In fact, the one across the street was one I'd bid on and lost. So I knew what it could look like which was a good thing. Because … WOW. 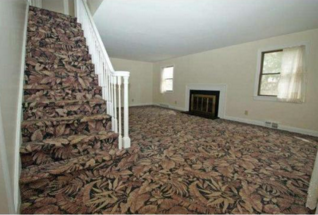 "It's just carpet, it's just carpet," I told myself as I walked through. My realtor tried to convince me I could live with it for a while. I told her to stop … that she already had the sale. I knew from looking at the other houses on the street that these homes had hardwood on the first floor and just prayed I would find something in decent, usable condition underneath this craziness.

I settled on the house a few days before the movers arrived in order to have some time to work on the house. My best friend and our teenage sons couldn't rip the carpet out fast enough. I wish I could say pulling out the remaining 10,000 staples was therapeutic, but it wasn't. Underneath, the floors weren't in the best shape, and in the dining room (Oh yes, this carpet was EVERYWHERE), the prior owner had removed the hardwood and put down linoleum. Surprise! But at least it was neutral. More importantly, it wasn't this carpet. With scratched up hardwood floors and unexpected linoleum, my furniture and other belongings began to arrive. Suddenly, this strange place started looking and feeling like home. Ready or not, I was entering a new chapter of my life.

Now two years later, I've since had the hardwood refinished and the linoleum removed. The dust has settled on our unexpected life, and all is good…We are happy and loved. I'm extremely grateful for everything that we have. And I still don't miss that carpet.