That's right, I call them reso-goals now, not resolutions. Resolutions are things like eat healthier, lose weight, get organized - things I know will only last a few weeks and end up with me feeling like a complete failure.

Instead, I like to set goals, with set end dates at different intervals throughout the year. For health, my goal this year is to be able to walk a 5K by summer. Yes, that sounds easy - but not for me. I have RA, and I have to work up to it. I know I can do it, however, it just takes time. In fact, I was almost there before I had an unfortunate medical "thing" happen in October that kept me off the treadmill for the past 9 weeks (long story). So I'm starting over - I know better to say I'm going to run a 5K or say I'll go to the gym 3x a week. A resolution like that I'd surely fail at. But my reso-goals are most definitely attainable.

I began setting reso-goals a few years back with my writing. At the time, I didn't realize they were reso-goals. I was still calling them resolutions. But now, looking back, I see why I was able to succeed at some things and not at others. It's because I needed attainable goals with an actual plan - not just an "I'm going to do this", without any direction.

Anyway, as most of you who have followed this blog know (because I tell the same story almost every year),  I had a story idea that had been floating around in my head for years (as in at least ten). I'd tried to write it many times and failed. But that particular year, on New Years Day, I set a goal for myself. I wanted to write just three chapters of my story that year. They didn't even have to be in order. I just wanted to get *something* down, and I had an entire year to do it. In May I decided to give it a try. I wrote my three chapters. They were awful - but I didn't care. I had met my goal, AND I discovered I loved to write. In fact, I couldn't stop writing (and haven't since).

Last year, I found a white board in my house that no one was using and quickly claimed it for my office. On New Years Day, I wrote down my writing reso-goals. I'm proud to say I met them all (and am on track with the one that overlaps into 2014). 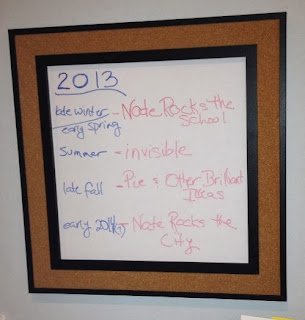 This year, I did the same. My 2014 reso-goals are hanging in my office - ready to be accomplished. 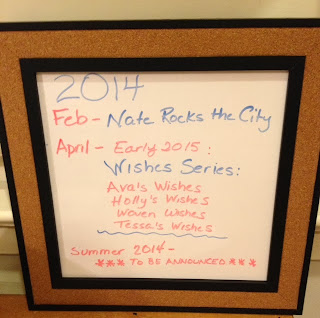 So what are your reso-goals?