8:26 a.m. The last of my three kids were on the school bus. I opened my laptop, ready to start my day with a killer Facebook status and typed in the following:

WHAT? I tried again ... and again ... Then I tried to post it from my phone because clearly my laptop was just acting up and guess what I got... 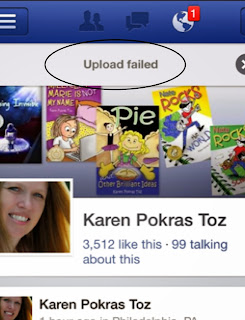 EXCUSE ME? But how would I let the world know what I was up to? Even more important - how would I know what the rest of the world was up to?? I immediately went to my news feed. As I suspected, my last bit of "news" was over an hour ago. The cold sweat began to take over, followed by the tremors. I began to google: "Can't post on Facebook" followed by "Facebook broken". Nothing recent came up.

Could it be? Was Facebook .... DEAD? How would I get through my day? HOW? Just then I did something unheard of. I clicked on the little "x" in the corner. Yes, folks, I shut down Facebook. Not only that - I finished folding the laundry (*GASP*) Then, I returned to my computer and cleaned up a chapter I had started writing over the weekend for my next Nate Rocks book involving aliens and the Statue of Liberty (yes - you read that correctly). I even caught up on some old emails.

What I'm trying to say is, I actually got some productive work done!!!

I did eventually log back on, and I'm happy to report, everything is back in working order in Facebook land. However, it seems that I was not the only one who noticed the little snafu this morning...

Here are some of the posts in my feed:

"Facebook checked out on all of us this morning and we are trying to hobble along as best as we can."

I can only imagine what the world will be like if Facebook ever really does die! I mean - how will I tell the world what I'm eating for lunch?