Hey Everyone. Yes - I know I'm a day late on the Author Spotlight and yes, I know it's not Halloween yet, but my pal Lucian Barnes asked me to help him out with a cover reveal today and you know how much I LOVE cover reveals... you also know I'm a big WIMP (well maybe you don't know that part, but I am). I have to admit right up front that Lucian's books are SCARY and perfect for HALLOWEEN.  So ... I'm going to be brave and post his very cool cover here.... 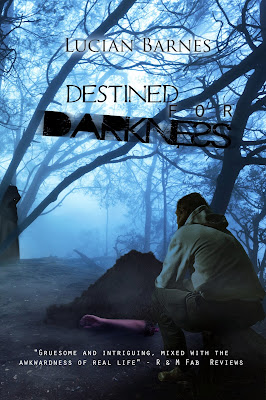 Here's more about Destined for Darkness:


Frank Mancini had suffered with his abusive mother for many years, until the day that he snapped. After telling his friend, Johnny, about the incident, his friend encouraged him to leave Misty Hollows. Taking his advice, Frank journeyed across the country to California hoping for a fresh start.

Shortly after his arrival, he met a beautiful woman. He was determined to hide his dark past from her, especially after finding out that she was a psychic, able to see both the past and the future of anyone she came into contact with. He managed to hide his secrets from her until several years after they'd gotten married and started a family. Fearing that she would turn him in to the police, he killed her. Not realizing that his son, George, witnessed this act, Frank decided to take him back to Misty Hollows.

How would the memory of his mother's death effect young George? Would he follow in his father's footsteps? Journey through the years, from infancy to adulthood, with George to see if he can resist the inner darkness!

And an Excerpt: (Don't mind me, I'm going to keep my eyes shut for this part...)

"Where exactly is ..." Frank's question trailed off unfinished as he noticed the small stone structure. The man was standing by a sturdy-looking wooden door. As Frank approached, he could see an intricate carving—which almost seemed to be burned into the wood—depicting a strange symbol he'd never seen. It was a five-pointed star with the image of what appeared to be the head of a goat inside. Two circles surrounded this odd emblem, one touching the points of the star, the other was larger. There were more markings between the two circles, each one near a point of the star.
The man pulled the heavy door open and beckoned Frank to come inside. The interior of the building was dimly lit by two iron candelabras hanging from the vaulted ceiling by long chains, giving the chamber an ancient feel as if it belonged somewhere in the middle ages. When the man closed the door to the outside it added to this effect.
"This way, please," he said as he went to a nearly solid metal gate. It creaked open and revealed a stone staircase leading into the ground. Torches flickered at intervals along the way, casting their shadows in a way that made them look like they belonged to something inhuman.
Frank wondered where he was being led. This didn't seem like a place Candice was likely to hang out, and the further down the stairs he went the more he had the urge to turn around and run. Their footfalls continued to echo eerily in the passage until they finally reached a large chamber at the bottom.
Torches blazed all around the outer edge of the enormous room. Hanging on the far wall was another rendition of the symbol from the door leading outside, only this one was much bigger. So large, in fact, that it took up almost the entire wall. In front of the huge tapestry bearing this emblem was a bald man wearing a black robe, standing behind what appeared to be some sort of church-like altar draped with a blood red cloth.
As the two of them crossed the chamber, the bald man regarded them with furrowed brows. "Brother. Who is the outsider you have brought here?" he asked in a booming voice.
"I didn't catch his name, but I found him in the woods. He was asking about your daughter."


Thanks Lucian! Happy Halloween!
Posted by Karen Pokras at 7:56:00 AM