Hey everyone! The Author Spotlight is back this week with an author who is not only new to you (maybe), but is also new to me - which I LOVE! New (to me) author = more BOOKS for me to read! YAY :)  So... today I would like to introduce us all to Susan Berliner. Susan is someone I met through a family member, and she was kind enough to let me interview her.

Usually I start my interviews by asking the author to tell us about their newest release, but since Susan is a new author to me, I want to start by learning more about Susan, the author - so let's start there... 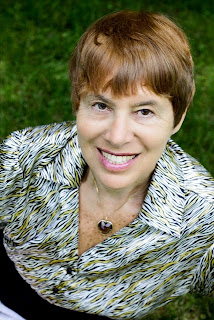 Susan Berliner has been a nonfiction writer for nearly her entire career. She had originally planned to be an elementary school teacher, but left after a year to become a newspaper reporter for Fairchild Publications. She covered men's retailing for Daily News Record, a men's wear/textile trade newspaper, which was the "brother" paper of Women's Wear Daily.


After Susan's children were born, she switched to freelance writing—mainly in education—publishing book series dealing with editing skills, language arts, and standardized testing. She also created teachers' guides, student activity sheets, and test passages. During this time, Susan was the project editor for a national science magazine for elementary school students and edited subject-related manuscripts for children in grades 7 and 8. In addition, she freelanced as a local reporter, covering board meetings for the North County News, a weekly newspaper in Yorktown Heights, New York.

When she returned to work full-time, Susan became the promotion manager for the Yorktown PennySaver, a job she held for 20 years. She created many original weekly contests including Phony Ad, Rhyme Time, and PennySaver Prophet.

After leaving the Pennysaver, Susan became a novelist. She is the author of three supernatural thrillers: DUST, Peachwood Lake, and The Disappearance.

Susan lives with her husband, Larry, in Yorktown Heights, where she is writing her fifth novel. Her website is www.susanberliner.com

Welcome Susan! Tell us more about The Disappearance. 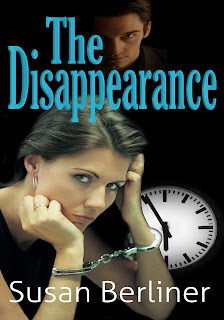 The Disappearance is a time travel thriller about a young woman, Jillian Keating, who is arrested for the murder of her missing boyfriend, Ryan Cornell. She discovers that Ryan has framed her and escaped into the past via a hidden time travel portal. Jillian first has to figure out why he hates her and then has to find Ryan and bring him back to the present. The solution involves an elaborate sting operation plus a trip through time.

Sounds exciting! What inspired you to write this book?

Since I've always loved reading time travel stories, I thought it would be fun to write my own. Time travel is a wonderful genre: Since it doesn't exist, you can be as creative as you want. People can travel through time in various ways—chairs, portals, dreams—and they can travel back to the past or forward to the future. And when they're in the "wrong" time, the rules can be whatever you want them to be.

I enjoy time travel stories as well. This one sounds great. What is the next story you'll be working on?

I'm writing my fifth novel, The Touchers, a doomsday story, also one of my favorite topics. It's told in the first person by Erin, a teenage girl. My version of the world's downfall doesn't involve a common form of annihilation—alien attack, meteor, nuclear explosion, or deadly disease. I won't give away my method of mass destruction, but I will say that it starts with bubbles. I thought I had finished the first draft, but my characters insisted they weren't done so now I'm writing Part Two. After I finish the first draft, I'll edit my fourth novel, Corsonia, which deals with mind control, another of my favorite fictional themes. In this book, two New York teen girls on a cross-country vacation stumble across a very strange town in the remote hills of northeastern Nevada.

You have a lot going on! When did you first consider yourself a writer? 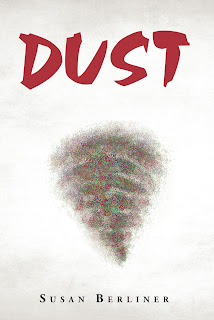 I've been a writer for my entire adult life, working as a newspaper reporter, editor, educational writer, and promotion manager. But I became a novelist after I read a small article about a strange weather phenomenon called "dust devils," miniature tornados strong enough to toss dust and dirt into the air. In the news clip that inspired me, a dust devil lifted the roof off an auto body shop, collapsing most of the building, and killing the owner. Since the story was so weird—and it happened in Maine—I was sure Stephen King would write a book about some kind of supernatural dust. I put the article aside and forgot about it. When I found the story a few years later, I realized Stephen King had never written a novel about weird dust. But suddenly I had an idea, which turned out to be the basis for my first novel,
DUST.

Stephen King missed out! Any advice to aspiring writers?

My advice is to treat writing as a job—something you have to do. Get into a writing routine and force yourself to work for a certain amount of time every day. That's what I do. Even if I don't feel like working, I close the door to my den, concentrate, and write. And it doesn't have to be for a long period of time. Set aside an hour, half an hour, or even fifteen minutes. There's always time to write. You just have to make up your mind to do it!

I couldn't agree more! Who is one of your favorite characters that you have written?

I have two favorite characters: Monique in Peachwood Lake and Cheri in The Disappearance. They're both likeable young woman who support my protagonists. 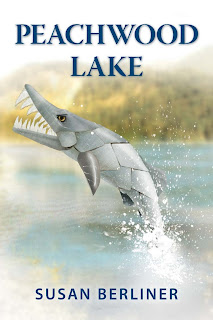 Monique Atchison is a sassy African-American reporter for a trashy newspaper called Weird World Weekly. She provides female counseling for Kady, the lonely—and motherless—13-year-old main character. Monique is smart, hip, and fun—everything Kady wants to be.
Cheri Orchid (nee Anna Maria Buonoverduccio) is an exotic dancer, a "bad" girl with a kind heart who befriends Jillian, the naive heroine whose missing boyfriend has framed her for his murder and then disappeared. Cheri takes a genuine interest in Jillian's situation and is glad to help when she's needed.


What is something people would be surprised to know about you?

Met? Jets? That's it - we can no longer continue this interview... Kidding! On to the important stuff: Coffee or Tea?

I was born in London, England so it's not surprising that I've always loved tea. My parents used to brew Earl Grey on weekends. I never drink coffee, just tea.

Hmm... I don't think I've ever had an author here on the Author Spotlight who didn't drink coffee. I enjoy Earl Grey tea as well .. and coffee ; )  Next question. If you could have a superpower, what would it be?

I'd want the ability to time travel. On the TV series, "Heroes," the aptly named character, Hiro, was able to travel into the past or future, even stopping time so only he was able to move. I think that would be an awesome ability, with the potential to be a real hero—transport to the past to prevent atrocities (murders, wars, accidents) or step into the future to see what's ahead and then try to change any upcoming disasters.

After the answer to your first question, I sort of had a feeling that would be your super power. Do you have anything additional you want to share with the readers?

My three novels—DUST, Peachwood Lake, and The Disappearance—are all fast-paced thrillers with touches of the supernatural. They're fun reads for women, men, and teens.

My website, www.susanberliner.com, which is updated frequently, contains descriptions and reviews of each books, videos of recent TV appearances, blogs (I post twice a week on writing-related topics), upcoming events and photos, and creative contests.

Where can people find you and your books online?

You can buy The Disappearance, Peachwood Lake, and DUST online at Amazon and Barnes & Noble. The novels are also available as e-books for Kindle, Nook, and other e-readers. The direct online links are on my website's "Order" page: http://susanberliner.com/order_264.html

When Jillian Keating is arrested for the murder of her missing boyfriend, Ryan Cornell, she has two immediate questions: Why did he frame her—and where is he hiding?

Using her own ingenuity, plus the help of a resourceful lady lawyer and a dashing young private investigator, Jillian discovers the surprising—and disturbing—answers. Her boyfriend is not what he appears to be. The real Ryan, consumed with hate, has devised an ingenious scheme to destroy her while he escapes into the past via a hidden time travel portal. But even knowing all this, Jillian is left with a more difficult question: How can she capture Ryan and bring him back?

Filled with memorable characters, bizarre twists, and riveting suspense, The Disappearance culminates with an elaborate sting operation as Jillian and her friends travel through time to lure Ryan into their clever trap. If they succeed, she will go free. But if they fail, Jillian will surely face murder charges for the death of Ryan Cornell.