Hi everyone! Today I'd like to welcome a friend and fellow blogger A.B. Shepherd to the Author Spotlight!Yes - I said blogger - we met as bloggers, but she can now also add author to her resume as she recently released her debut novel, a sci-fi mystery, called Lifeboat.

Congrats A.B. and welcome! Tell us a little about Lifeboat: 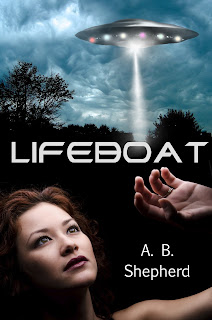 Lifeboat is a science fiction/mystery novel about a young woman who has lost her husband and son and has been unable to move on with her life. She walks when she can’t sleep and one night while walking she sees a UFO. This UFO gives her something to fixate on, to give her life meaning again. She meets up with some Ufologists and one night while sky watching they are abducted, or rescued, by that same UFO and told the Earth has been destroyed by natural disasters. They are taken, along with other survivors, to a new world where the human race can start again. Only problem is survivors start disappearing and their new life is threatened. Cass has to solve the riddle of these disappearances in time to save herself.

It sounds great! What inspired you to write Lifeboat?

I was inspired to write Cass’s story after watching a very bad TV show called UFO Chasers. The premise of the show is a woman and two men who run around the world researching UFO sightings. I thought I could write some kind of adventure story about a woman who did that. But when I sat down to write it Cass took over and told her own story. It wasn’t a fun adventure story about UFOs. It was a bit darker. A bit sadder. But it was a really entertaining story and I couldn’t wait to get up each day to write more so that I could see what would happen next. For me, the writing process for Lifeboat was a lot like reading a book I was really enjoying. I had no idea what was going to happen until it showed up on my computer screen.

I love that description of writing! I think that's the best part of writing for me also, and why I don't like to outline.  Are you working on a new story now that Lifeboat is finished?

I’m working on a novel that I am calling The Beacon. It’s about a young woman who is shipwrecked on a tiny island which is a lighthouse station. There will be lots of suspense with this one too, but it isn’t science fiction. You can read the first three unedited chapters on my website.

Sounds intriguing (& readers can find the link to your website below). When did you first consider yourself a writer?

This is something I actually wrote a post about on my website a while ago. I asked myself that question - when would I consider myself a writer. My answer was when I sold my first book. Because I have fabulous friends and family I sold my first book within minutes of publishing it. To this day I have no idea which of them purchased it, but I was overwhelmed with emotion at this little dream of mine - being an author - having been realized.

It's a great feeling - congratulations!! Are you writing under a pen-name, do you use your own, or is your work out in both ways?

A.B. Shepherd is a pen name. I’ve not put any of my writing out under my own name for a couple of different reasons. One of which is that my writing is very personal to me. I feel like I put a lot of myself into some of my characters, which is like opening my psyche up to the entire world. It’s just not comfortable to do that under my own name. The second reason is that my mom passed away a few years ago and my pen name honors her. The third reason is that by using initials instead of a first name, I hope to minimize any gender bias there might be regarding my books.

All great reasons & I promise not to give it away! Do people judge a book by its cover? Who makes yours?

I don’t typically judge a book by its cover, but rather by its blurb. However, I know many people do judge by the cover. I actually have two covers for Lifeboat. I had one that I had commissioned through a graphic artist that I was quite happy with. I’ve networked with some people through social media and one of them read my book in a rough form. She was blown away by the book, but she hated the cover I was planning to use. That friend was Anastasia of Anastasia Creatives. She, as a favor, created another cover which is Lifeboat’s current cover and I fell in love with it too. I had a lot of difficulty choosing between the two, so I put them up before a panel of people I trust. The votes were pretty even, but my daughter’s vote was the deciding one. I’ve actually just recently had someone tell me they hate Lifeboat’s cover and thinks it makes it look like a romance novel. Go figure.

No - I definitely see sci-fi in your cover - not romance, and I also appreciate being a part of the group of people you asked to help you decide :)  Can you see yourself in any of your characters?

There is definitely a part of me in Cass. She is not me, and I am not her, but some of her reactions and emotions are mine. I don’t think there is much of me in the other characters in Lifeboat. I suspect my heroines will always have a piece of my heart in theirs.

As a child, what did you want to be when you grew up?

I’ve always been a very contradictory person. One part of me wanted to be nothing but a mother and housewife. Not only a mother and housewife, but one who lived very simply, hanging laundry on the line, tending a vegetable garden and feeding my family from it, and just being surrounded by a loving, appreciative family.

Another part of me wanted not just a successful career, but a high-profile career as a trial attorney. I had plans to go to law school up until I figured out how many years that would take. Then I completely reconsidered and settled for a job in the legal department of a huge corporation while I raised my children.

You sound like me, except I went the law school route and then did the housewife thing. Cats or Dogs?

If I said puppies and kittens could I have both? I love puppies and kittens. I still love cats and am generally not as fond of dogs, but I find that pets are a bit like children. You adore your own, but don’t have as much interest in anyone else’s.

That's a great answer!! What is one thing that you could not live without?

It’s going to sound really cheesy to say it but I could not live without my husband. I know, that is very codependent of me. He is my biggest cheerleader, my brick wall when I need one to lean on, and my teddy bear when I need a cuddle. I would never have completed Lifeboat without his continuous support throughout the entire process.

No not cheesy at all - that's exactly how it is supposed to be. Anything additional you want to share with the readers?

You’ve probably heard it before, but the best thing you can do for any author is to leave a review, whether you love their book or hate it. If you hated it your review can provide feedback the author can learn from. If you loved it - well who doesn’t like praise? So if you decide to read Lifeboat - thank you. I am honored. But if you decide to leave a review I will also be grateful. And feel free to email me at TheRealABShepherd@hotmail.com. I love to connect with readers.

Yes - thank you for that great reminder. Where can people find you and your books online?

Cass Carmichael has lost everything; her husband, her son, and her will to live. She walks the streets and paddocks when she can't sleep. One night she sees a UFO. She can't stop thinking about it. She becomes obsessed.

When natural disasters destroy the earth she is rescued by extra-terrestrials and taken to a new world where the human race can rebuild.

But something is wrong here. This may not be the Utopia she expects. Survivors are vanishing without a trace. 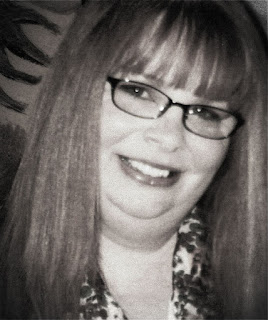 Can Cass unravel the riddle in time to save herself?

A.B. Shepherd grew up in Lansing, Michigan, but moved to Australia in 2009. She now lives in the Limestone Coast region of South Australia, with her husband and their imaginary friends. She can usually be found seaside at Port MacDonnell, or lost in a fantasy world.

Lifeboat is her debut novel. The Beacon, her second novel, has an anticipated release date of Christmas 2013. 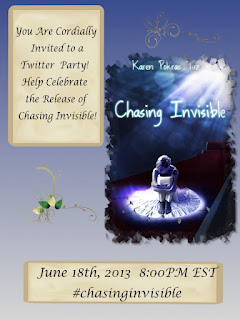 Follow the tour and join me for a kick off
TWITTER PARTY on JUNE 18th at 8:00pm EST #chasinginvisible