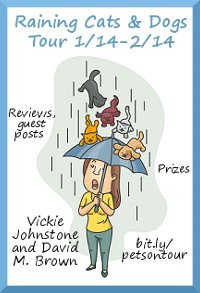 Hi everyone. Today I'm so excited because not only do I have author, Vickie Johnstone on my blog today, but I'm also part of her Raining Cats and Dogs Tour! Vickie is the author of the wonderful children's/middle grade series Kiwi in Cat City. My review of book one of the series can be found below. I not only love Vickie's books, but I also love that she is a black cat lover like myself.  Vickie is also the author of several poetry collections, as well as the newly released romantic comedy, 3 Heads and A Tail. Vickie was kind enough to write a guest post for us today....

The furry inspiration behind Kiwi in Cat City
By Vickie Johnstone

Most of my books are for children; middle-grade, especially. I didn’t set out to write books for kids – it just happened. The first proper book I ever finished was Kiwi in Cat City, in 2002. I had been made redundant and suddenly had a lot of time on my hands.

The book was inspired by a little black, fluffy, golden-eyed, chubby cat that I used to have, called Kiwi. She was cheeky, intelligent, curious, and liked to follow me down the road on the way to work – I’d have to scoop her up, take her back and run off! I’m sure she’d have hopped on the train with me if she could. Kiwi liked to chase shadows on walls, munch Whiskers food, roll on her back with her paws in the air for strokes, and hunt birds (alas, she was very good, and it was the only thing we argued about). When she wasn’t trying to swipe the dinner off my plate when I wasn’t looking or jumping in the air to catch a moth in mid-flight, she’d be curled up on my bed or waiting to pouncing out at me.

One day she followed me to the supermarket round the corner, waited patiently on a wall, and then came back home with me.

Kiwi was lovely, but I lost her in 2000, when she was six, which is no age really. I started to really hate cars.

When she was still alive, I wrote a poem about her. In 2002, during this time between jobs, I reread it and started thinking about a world populated by cats. I’d lie in bed at night, imagining it. They ran their own lives and did their own thing. I named this world Cat City, where cats roamed free and happy, away from the dangers posed by cars and dogs, and where it was always summer. The star would be Kiwi. I would bring her back to life on paper and make her go on adventures. In Kiwi in Cat City, she is four, and she is ‘owned’ by Amy and James, and their parents, in the human world. I ended up making Amy a bit like me, although I named her after my niece. James was just my favourite boy’s name.

Gradually, other characters started talking and a catnapping plot emerged. I was writing by the seat of my pants, as I had no idea where the book was going, but I was also having a lot of fun. I wrote every day. Kiwi became magical and able to communicate with the kids, whom she turned into kittens and took on an adventure to her other home – the blue-lit Cat City. Soon other characters evolved – Siam, a computer whizz with bent whiskers, Inspector Furrball, a ginger tom with a very red waistcoat, and Kip, a good friend of Kiwi’s, among others. Plus there had to be a bad cat and a few red herrings.

It’s easy to see what inspired me – my cat and my lifelong obsession with fluffies. I’ve always been crazy about animals. They make me go “Ahhhhhh!” When I was a child I wanted to be able to talk to our pets. Our house was full of them – my mum ran a mini zoo and it was magical to me. One of my best-est buddies at the age of six or seven was our cat Mitzi, who I talked to and was sure she understood. My dad had an aviary full of birds and I thought I could communicate with them by winking. I’d go into the aviary, hold out my two little hands full of bird seed, and the budgies would land to feed. They’d also hop on my shoulder to do the winking thing.

We also had a dog called Glen, who was a border collie. I don’t remember much about him, except that he covered me with dirty water whenever he went for a swim when we took him for walks. I imagined he was laughing every time he did this, and that he’d do it on purpose, kind of naughty like. I immortalised him in a book called 3 Heads & A Tail, which I wrote for NaNoWriMo 2011, although the dog in it is a Labrador. You can read about that if you like in another post on this blog tour.

The things I loved as a kid all involved animals. Our petting zoo at home was one thing. My favourite TV shows were Top Cat, Scooby-Dooby-Doooo, Bugs Bunny – I wanted to marry him and didn’t realise him being an animal and a cartoon would be a problem – Tom and Jerry, The Clangers, Mr Benn and The Mr Men. As you can see, animals ruled supreme while Mr Benn was all about journeying by magic to the past and The Clangers were just plain off-the-wall.

On Fridays we had playtime at Junior School. There was a Wendy House and loads of outfits to dress up in, and us kids could bring our games. My favourite was Hungry, Hungry Hippo, where you just bashed your colourful plastic hippo up and down to gobble up more marbles than your friends’ ones. Not much too it, but the hippos were cute. Of all the costumes, I literally sprinted for the white bunny outfit with big floppy ears. I think my classmates knew I was obsessed with it, and always let me wear it. One day another girl got there first and I sulked all afternoon! She must have felt sorry for me because it never happened again!

My favourite books all starred animals: Winnie-the-Pooh, Narnia, Fantastic Mr Fox, The Ugly Duckling, The Three Bears, The Incredible Journey, Pigling Bland and Watership Down; a little later, the It Shouldn’t Happen to a Vet series, Call of the Wild and Animal Farm. And these are just a few that I can think of! Human characters just didn’t get a look in. To me, they weren’t as interesting as animals, especially ones that could talk. If a book didn’t star some furry hero, it had to contain magic, such as The Little Mermaid, Sleeping Beauty and the Folk of the Faraway Tree, though the latter did have a squirrel! Magic AND talking animals – now that was the ideal!


So, back to Kiwi in Cat City... In a few weeks I finished writing it. I’d had so much fun that I surprised myself, and I’d managed to write every day. But the big thing was that I’d actually completed a book; a whole book. I hadn’t finished a story since I was at senior school. I remember having this big feeling of accomplishment. And I was very happy because my little Kiwi had become immortal.

It would be another nine years until the story saw the light of day and was read by someone other than myself, but that’s another story. Today, my little Kiwi is the heroine of her own series, the Kiwi Series, of which there are now six books, and never a finer heroine could there be. Long may she purr!


About Kiwi In Cat City:

One dark night, Amy cannot sleep and she looks out of the window into the garden to see her cat, Kiwi, transfixed by the moon, which is glowing brightly like a cat's claw. Waking her brother, James, Amy suggests they follow Kiwi to see where she goes... whether it involves a hunt for mice or something else. Little do they know that, with a flick of her tail, Kiwi is going to magically change them into kittens and lead them on the adventure of their lives to a land they never knew existed in their wildest dreams. In the blue-lit world of Cat City, the budding detectives help Inspector Furrball to solve the mystery of the missing catizens and find out what happened to Madame Purrfect. For children aged 9+, teens and adults. This book is the first in the Kiwi Series. So far, there are six books. Illustrations by Nikki McBroom.

I have often said I wish I could be one of my cats for a day. No pressures, just eat, sleep, play... and if your cat happens to be Kiwi, you also apparently solve mysteries and fight crime in the middle of the night. Sounds pretty awesome right? (Or should I say "paw some")  Well it is, and so is Kiwi in Cat City, by Vicki Johnstone. This is a great book for all ages - a "who dunnit" where cats are the main players. It's such a great concept. I loved reading how the  children adapted to their new cat status. The illustrations are lovely as well. As I watch my own cats fast asleep this morning, I have to wonder what it is that's got them so tired out.  I'm looking forward to reading more of Kiwi's adventures. 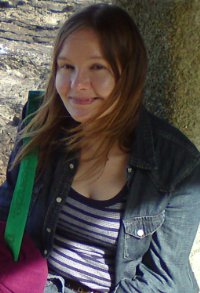 Vickie Johnstone lives in London, UK, where she works as a freelance sub-editor on magazines and an editor on indie books. She has a thing about fluffy cats and also loves reading, writing, films, the sea, rock music, art, nature, Milky Bar, Baileys and travelling.
Vickie has self-published the following books:

The Kiwi Series has illustrations by Nikki McBroom. 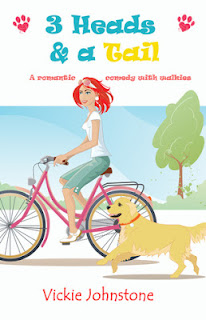 
Thanks for stopping by and make sure you enter the It's Raining Cats and Dogs Tour Raffle!