Happy Thursday before Thanksgiving! It's also Author Spotlight day, and today I'm super excited to have my friend, fellow number cruncher, and author Pavarti K. Tyler here. Pavarti writes in many different genres. I'm a big fan of her fantasy serial novel Two Moons of Sera. You can read my reviews of volumes one and two here. I still owe Pavarti a review of volume 3. So in a nutshell, here it is:  I loved it even more than volumes one and two!! As I patiently wait for the release of volume four, I'm thrilled to have Pavarti stop by with a guest post for us today:

I remember sitting in a friend's basement, surrounded by Ikea furniture and watching Clan of the Cave Bear when her Dad wasn't home from work yet. It was one of those winter snow days when I was too young to be allowed free reign but too old to be stuck in the house with my mother. Little did she know what trouble a couple of middle school girls could get into in a small town house development in the middle of the day. 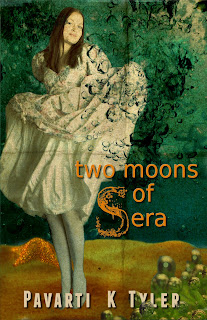 It wasn't until a few years later when I bought a copy of Jean M. Auel's novel for myself that I understood that Ayla's story wasn't just about sex and rape. I've never seen the movie again, so perhaps this is an issue of maturity, or perhaps it's just that the soul of the book was lost in translation from page to screen.

Clan of the Cave Bear was about so much more. It covered anthropology, sociology, genetics, geology, psychology, evolution and many many other topics. The issues of gender discrimination, prejudice and what it means to be human were all covered. Oh and there was a lot of sex in the series too.

When I started drafting the storyline for Two Moons of Sera I wanted to build a world. A complete, three dimensional world, for my characters to live in. Because this happens in a place so different from our own it was essential to distill the similarities we could relate to while highlighting and explaining the differences. I looked back at other books I'd read where the landscape of the story was so different from our own to try and get advice from those who had done it so well.

Battle Field Earth (shut up, it's brilliant) didn't offer much help as it is about aliens and accentuating differences. The Wind-up Girl (also brilliant) didn't give me any insight because it's a post-apocalyptical look at our own world. What I needed was an innocence, a purity of vision that would allow the world of Two Moons of Sera to seem natural.

There was a time when I would read Clan of the Cave Bear over and over. I even named the first dog I got as a puppy Ayla. It's exactly the complexity of Auel's world building that makes it feel so natural. This is what I wanted to 2MOS.

As I write I ask myself, is there something about this we need to understand? Is there something here that goes deeper than just the surface story? Are there aspects of life, science, history that would add dimension to the world?

In Two Moons you will find three completely different, and yet hopefully relatable species of people. You will come to know their fears, their bedtime stories, their eating habits and their mating practices. In the end I hope you will feel so emerged in their world that as you learn more about them, it will deepen your understanding and connection to the characters.

Because in the end it's about the soul of the story. 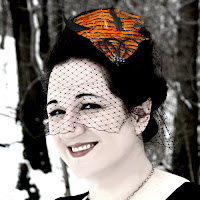 Pavarti K Tyler is an artist, wife, mother and number cruncher. She graduated Smith College in 1999 with a degree in Theatre. After graduation, she moved to New York, where she worked as a Dramaturge, Assistant Director and Production Manager on productions both on and off Broadway.

Later, Pavarti went to work in the finance industry as a freelance accountant for several international law firms. She now operates her own accounting firm in the Washington DC area, where she lives with her husband, two daughters and two terrible dogs. When not preparing taxes, she is hard at work as the Director of Publicity at Novel Publicity and penning her next novel.


Thanks for stopping by! Now get back to writing, Pav - I need my 2MOS fix!

PSST! Today's my birthday and I'm giving you presents! It's more fun that way!!

First - pick up your FREE Kindle Copy of Nate Rocks the Boat!

Then - head over to my  Facebook Author Page to try to win SWAG & other prizes all day long! Hope to see you there!