Hi everyone! Today we have a really cool Author Spotlight. A while back, I met an author online named Alison DeLuca. We were instant friends, and it turned out that she only lived about 90 minutes away and was friends with someone I had met a few years back at my child's bus stop! Talk about a small world! Anyway, last month, we met in person at a writer's conference where we were both panelists. It was there, that I had a chance to finally check out her books. Alison writes Steam Punk which is a genre I honestly knew nothing about, but since I've been venturing into new genres lately (and for the most part have been enjoying them), I thought why not? At the end of the conference, we traded books and promised to meet up for coffee (Psst - Alison - we still need to do this!)

The book Alison gave me is called  Night Watchman Express. It is the first book in a series of three that make up the Crown Phoenix Series. I've posted my review below - but here's  what I thought in a nutshell: I loved it so much that I went out and purchased the next two books!  Okay ... now on to my *proper* review of all three of Alison's books (& hopefully without any spoilers):

Poor Miriam Pearson has just lost her father, although to be honest, she really didn't like him to begin with. However, compared to the couple sent as her guardians, she would have preferred her father.

All hope seems lost until a mysterious governess from a far away island named Mana shows up to take charge and protect Miriam from her greedy guardians the Marchpanes and their evil business partners the Cantwells. 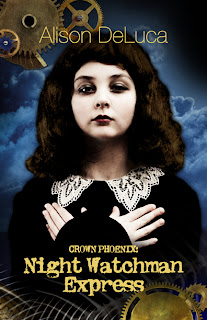 To pass the time, Miriam writes stories both in her journal and on her father's prized, yet mysterious "writing ball", the Crown Phoenix. She also enjoys hanging out with the Marchpanes' son Simon & his friend Neil . At night she fears the whistle of the Night Watchman Express - the steam train that passes through and haunts her dreams.

I just loved this story! There is so much going on right from the beginning, with the arrival of the Marchpanes & Mana. I loved all the characters brought into this story and the way the author described and developed them.  I felt I was living right alongside Miriam in her big old house. I have to admit, I had never read steam punk before and did not know what to expect. What I found was a great story which took place in Edwardian times. So many times, first books of series can be disappointing as the author spends way too much time on the back story and not enough time on plot. Not true here - there were plenty of plot twists, as well as a great ending! This book is perfect for adults and teens. I immediately downloaded the next book, Devil's Kitchen and couldn't wait to get started. 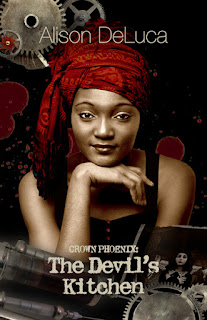 In this second book of the Crown Phoenix series, Miriam & Simon find themselves as captives after an unexpected ride on the Nightwatchman Express. While Simon winds up with luxury accommodations (albeit still a prisoner), Miriam is stuck underground in Devil's Kitchen, working long hours and living in a tiny cell. Lucky for them, Neil and Mana (who we learn at the end of book one is not quite who we thought) are on a quest to help Miriam and Simon escape.

This second book moves between Miriam's, Neil's, and Simon's stories all taking place at the same time. There is so much action and some great new characters (who we met at the end of book one) such as Riki & Kyoge. This installment brings us closer to learning the secrets behind the writing ball known as the Crown Phoenix. Another great book by Alison DeLuca. Once again, I immediately downloaded the next book! 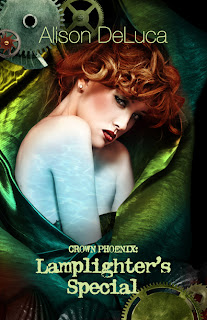 This is the third book in the Crown Phoenix series. Here we get to meet Neil's family and learn about their story. In particular his sisters Ninna & Lizzie, who are now working as housemaids on a farm for a Squire and his two sons Toby and Priam.

In this book, we find out even more about the mysterious Crown Phoenix and the passage to get to and from Lampala on the even more mysterious ship, the Lamplighter's Special.

We also become reacquainted with the Cantwells who are now known as the Wilkins, and are as evil as ever as they continue their quest to become rich by harvesting illegal drugs.

I love how this fabulous book goes off on a side story and then reels itself back in to connect with the main story. Alison does such a great job with story development in this book, and I love the romantic elements that are subtly brought in (while still keeping everything appropriate for teens). With many questions answered, we are still left with so many unknowns! I'm so looking forward to the next book! (And here is where I enter my plea: Write Faster!!)

Alison DeLuca grew up on an organic farm in Chester County, Pennsylvania.  Her parents were British, so in the summers she went to stay with her grandparents near Dublin. 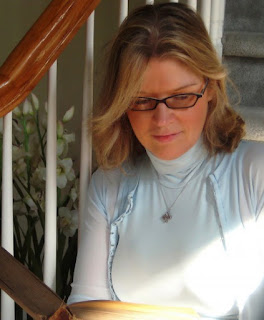 There was no stereo or TV there, so Alison, her sister, and her cousins spent the summer inventing stories and plays for each other.  “This gave me the ability to entertain myself with my own imagination in any situation,” she says. “We used to be taken to tea with great-aunts, and we were expected to sit on an uncomfortable couch and not move or say a word.  It was possible to endure it because I was watching my own little stories play out in my mind.”

After graduating from West Chester University, Alison became a teacher of English and Spanish, teaching students from kindergarten up to college level. She loved teaching, and it was with reluctance that she left the classroom to be a fulltime mom when her daughter was born.

While she was teaching and raising her daughter, Alison took every free minute she had to write.  The Crown Phoenix Series was the result.

She is currently working on the final book in the series, as well as several other projects.

You can find Alison here: