Welcome to another Author Spotlight! Today, I have fellow middle grade author Val Muller. Val's newest book Corgi Capers: The Sorceress of Stoney Brook is perfect for your 7-12 year old's Halloween reading list!  Today Val joins us to talk about the inspiration behind this latest book: There’s just something about autumn: the crispness in the air (or maybe the chill), the changing leaves, the golden sunshine, the harvests of apple and pumpkin. This time of year has always been one of my favorite, and I’m celebrating with the release of my latest book, Corgi Capers: The Sorceress of Stoney Brook (DWB Publishing, October 2012).

When I was younger, a white van followed me and a group of neighbors down a dark street on Halloween. Laden with our bags of candy, we ran for cover. Some of the neighbors ran to a nearby house for help. I hid behind a tree. I knew I was safe, but there was something fascinating about the whole thing. I wanted to see it happen. I wanted to try to get a glimpse of the creeper driving the van, to see what kind of a person would try to scare kids like that. Watching it happen, I realized—despite the fear and adrenaline—that it would become a formative memory of my life.

The van pulled away as soon as the neighbor kids reached the porch, but the excitement didn’t end there. We gathered at one of our homes, our parents were summoned, and we each had to give a story to the police. Knowing I was safe, I relished in every detail—from the way different parents reacted to the policeman’s demeanor. Still, the potential for danger during trick-or-treat made all my subsequent Halloweens a bit more genuine. The sinister smiles on jack-o-lanterns were no longer the scariest thing to consider. Snakes and spiders hiding in piles of leaves near the side of the road no longer carried that same fear.

I tried to capture that feeling in The Sorceress of Stoney Brook. Worried that his neighbors are witches and followed by a white van, the main character has much more than the spookiness of trick-or-treating to worry about.

Book Two in the Corgi Capers series, Corgi Capers: The Sorceress of Stoney Brook embroils Adam and Patrick in the scariest caper yet. The old Frostburg house has new tenants, and to Adam and Patrick, they look like witches. Belle and Cassie dress elaborately, speak strangely, and seem to know way too much about the Hollingers. Adam and Patrick read about how Logan Zephyr, their favorite comic book hero, defeated an evil sorceress and wonder if they, too, are facing real witches. When Belle asks Adam to rake leaves for her close to Halloween, Adam decides it’s a great excuse to investigate the house—or is it the perfect way for the witches to cast a spell on Adam and his best friend?

Targeting middle-grade readers (ages 7 – 12), the novel switches perspectives between the corgis and their people, offering humor and insight entertaining to adults and children alike. While trying to solve the mystery of his new neighbors, Adam confronts other challenges as well: it’s the Autumn League playoffs, and the team is counting on Adam to pitch his heart out; Adam’s sister is hanging out with a high-school bully, and the two have nefarious plans for Adam; and Marnie, a girl at school, has been fighting the other girls over who gets to take Adam to the Harvest Dance—to Adam’s chagrin.


Excerpt:
“This is that weird lady I was telling you about,” Adam whispered to Patrick.
“She definitely looks like a witch to me,” Patrick said as softly as he could under Zeph’s frantic barking.
Sapphie looked as calm as could be. Her purple scarf matched Belle’s purple skirt. Belle also wore strange sandals that looked like they belonged on a Roman gladiator. She had just as many bangle bracelets as the last time Adam saw her, and now she tied her long hair back with a bright yellow bandana.
“Maybe you’re right,” Adam said. “How else would she have got a hold of Sapphie?”
Before Patrick could answer, Arabella called down the driveway. “I just made a fresh batch of warm, mulled cider. Would you boys like some?”
Patrick turned to Adam. “No way,” he said. “She might be a witch, and it might be a poisoned brew.”
“But if we have apple cider with her, maybe we can gather evidence,” Adam said.
“That’s true,” Patrick whispered. “Riley Couth would tell us to go investigate. You know—gather evidence.”
Adam grunted. “Okay, but if she turns us into toads, you owe me one.”
Patrick laughed nervously.
Zeph pulled Adam up the slanted driveway. When they got to the front porch, Belle put Sapphie on the ground beside Zeph. Immediately, Zeph quieted and sniffed his sister intently.
“How did you get a hold of Sapphie?” Adam asked, trying his best to hide his suspicion.
“She must have gotten loose,” Belle said. “Come inside. The cider’s nice and hot.”
Adam gave Patrick a questioning glance before following Belle inside. Even when Mr. Frostburg had lived in the house, Adam had never been inside. He wasn’t sure what to expect.
As soon as they entered the doorway, they followed Belle down three steps into the family room. The whole place smelled like autumn—a mix of cinnamon and vanilla, pumpkin spice and apple.
“It smells like the cider’s just about ready,” Belle said. “Have a seat. Make yourselves at home. Actually, if one of you wants to come up here and help me carry some cider?”
“Sure thing,” Patrick volunteered.
He gave Adam a nervous glance before following her into the kitchen. Adam peered through the kitchen doorway to see a large kettle bubbling on the stove. It’s like a witch’s cauldron, he thought while watching Belle ladle a spoonful of the bubbling liquid into a clear mug and hand it to Patrick.
He turned away and took Zeph off his leash, looking around the strange room. There was a small television in the corner, and a couch covered in a purple tapestry with black stars and yellow moons. On the other side of the room was a small, round table with two folding chairs. The table was covered in a Halloween-themed tablecloth with dancing skeletons, jack-o-lanterns, and witches. Spread on top of it was a deck of very large cards.
The rest of the room was a mystery. There were pieces of furniture, or maybe boxes, all covered in various tapestries, some plain colors, and others decorated with Celtic knots, dragons, or fairies. Adam couldn’t tell what was underneath them.
When Belle and Patrick returned carrying three mugs of hot apple cider, Belle handed one to Adam. He sat on the couch and took a sip, finding, to his surprise, it tasted delicious. Even Patrick would have to admit that it didn’t taste like witch’s brew. The three of them sat on the couch sipping cider while Sapphie and Zeph lay in the corner behind one of the tapestry-covered mysteries.
The décor of the house was so strange that for a moment, Adam forgot to ask how Sapphie ended up there.
“You sure have a lot of tapestries,” Adam commented.
“Oh, they’re just covering all of our boxes,” Belle said. “Cassie and I haven’t had a chance to fully unpack yet. I’ve been busy with my schoolwork, and Cassie’s been busy with her job and hobbies. She’s opening a new daycare facility in town, and she’s been busy painting murals on all the walls before she opens. She’s quite an artist. Not to mention actress.”
Adam nodded.
“What’s this?” Patrick asked, pointing at the strange cards on the little table.
“They’re tarot cards,” Belle said. “You’re supposed to use them to tell fortunes.”
Adam and Patrick exchanged glances. See, she is a witch, Patrick’s eyes seemed to shout.
“Whose fortune were you telling?” Patrick asked.
Belle laughed. “Actually,” she said, “I was telling Sapphie’s.”
“You were reading a dog’s fortune?”
Belle smiled. “Yes.” 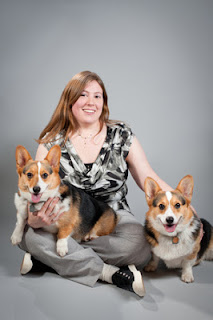 Val Muller lives in Virginia with two corgis and a husband. By day she teaches English, but by night and early-morning, she is a voracious reader and writer, reviewing one book every week on her blog and participating in a weekly flash fiction writers group (their serial story appears on her blog every Thursday). Her work has appeared in many magazines and anthologies and ranges from children’s literature to horror. You can see a full list of work on her website. Her horror novel for adults, Faulkner’s Apprentice, will be released in early 2013 with Crowded Quarantine Publications.

Thanks Val for stopping in today!