Welcome to the Author Spotlight. This week we are featuring author, Hank Quense. Hank wrote a great guest post for us today about his take on combining Shakespeare and humor. Yes - Shakespeare is funny didn't you know?


One way to write humor

I love rewriting Shakespeare. I take his characters and his plots, put them into a box, shake them up and spill out the bits and see what happens. This is one of the ways I produce humor in my stories.

One way to write humor is to create characters that have some quirkiness in their persona. Then the plot brings these characters into situations that causes the quirkiness to bubble up to the surface. As an example, I wrote a version of Romeo and Juliet. It was published in my Tales From Gundarland. Romeo (in my version) is a poor dwarf gem miner and Juliet is a rich elf maiden. When Juliet commits suicide rather marry an old count, Romeo doesn't kill himself. Rather he hires a wizard to restore her to life. Once the wizard does that, Romeo and Juliet sit in the tomb and discuss whether or not the undead can do IT? After a while, they decide to rent a room and find out it Juliet can do IT.

This is an illustration of how the plot functions to get the character's quirkiness in front of the reader.

In my newest book, Falstaff's Big Gamble, I used a similar process. First, I took the characters and plots (sort of) from Hamlet and Othello, jammed them together then added Falstaff for good measure. Once again, this takes place in Gundarland. Hamlet is a dwarf and Othello is a dark elf. Falstaff is unchanged. He's still an overweight human and a rogue who spends his time scamming both of the other two.
To demonstrate character quirkiness again, here is Hamlet's famous speech. More precisely, here is my version of the speech.


Hamlet, Crown Prince of Denmarko, paced the castle battlements late on a clear, cool spring night. He walked with hands clasped behind his back and head down. He had a thin nose with brown hair and eyes. His scrawny build and clean-shaven face gave him the appearance of a starving waif.

He paused, gazed at the multitudinous stars, sighed and continued his pacing. A breeze brought the smells of the harbor: salt water and rotting fish guts. At last, he stopped, thrust one hand to the sky and declaimed, "To bee or not to bee?" He stroked his chin. "Whether 'tis nobler to buy honey from the peasant farmer in the market and thus provide him sustenance and income to support his brood of brats, possibly keeping him from rebelling over high taxes . . . or to grow my own honey thus gaining coins to assert my independence from my noble family and the sordid court? Hmm."

He paced some more, still troubled by his vexing question. Nothing less than his future depended upon the answer. Because his uncle, and now stepfather, Clodio, had usurped his right to rule the kingdom, he needed a profession and an income.

"Do you always talk to yourself?" a voice said from the shadows.

"Who . . . who goes there?" Hamlet's head snapped from one side to another while his hand grasped the hilt of his dagger.

"'Tis I, the ghost of your father. I bring a message for your ears alone."

Hamlet goggled at the specter who materialized in the shadows of a doorway. "You're not my father's ghost. My father was a dwarf and you're the ghost of an elf. You're an impostor and a dead one to boot."

"Hey, your father is busy and he asked me to fill in."

"Busy? In the underworld? What's he doing?" Hamlet clutched his red tunic and tugged downward as if to hide his shaking hands.

"He met a good-lookin' ghost of a female dwarf and he's wooin her."

"Dead not a month, and he forsakes his wife, my mother?
"You gotta understand. Life on this side — no pun intended — is pretty
borin'. When you gotta a chance to do somethin' interestin', you gotta go with it."
Hamlet ran a hand over his face. Why me? he thought. "What's the message?"
"His death was no accident. It was murder most foul. Here is his exact message. 'But know, thou noble youth, the serpent that did sting thy Father's life, now wears his crown.’” The ghost paused then added, "Did your father always talk funny like that?"

"Didn't you listen? The message tells you who whacked him. Your father wants you to send this guy over here so he can talk to him. He doesn't wanna wait until the guy croaks from natural causes."

Hamlet watched in awe as the ghostly figure evaporated. A few seconds later, it popped back into sight. "Oh, I forgot to tell you. Your father says, 'Thy mother the queen is to know naught of this nocturnal visit.’" The ghost disappeared.

His father's murder shocked him. And the murderer had married his mother immediately afterward. Did the world have no morals?

He recalled his first thoughts when he'd heard of his father's death. How he admired the perseverance and tenacity his father must have had to commit suicide by suffocating himself with a pillow. Now all that admiration was wasted; the old dwarf had had help.
What to do? He needed to make decisions about bee farming and now he had to avenge his father. Was there no end to the demands on a prince's time? He said to the stars, "To bee-keep or to avenge? That is the question." 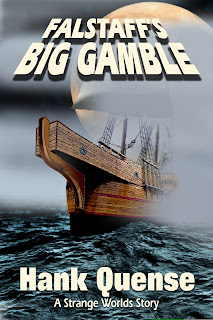 This novel is Shakespeare's Worst Nightmare.  It takes two of the Bard's most famous plays, Hamlet and Othello, and recasts them with fantasy characters in a place called Gundarland.  Hamlet is a dwarf and Othello is a dark elf.  Iago and his wife, Emilia, are trolls.


If that isn't bad enough, these two tragedies are now comedies with Falstaff, Shakespeare's most popular rogue, thrown in as a bonus.  Both Hamlet and Othello are plagued by the scheming Falstaff, a human. 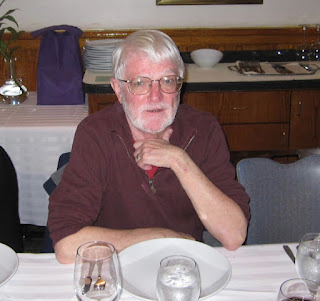 Award-winning author Hank Quense lives in Bergenfield, NJ with his wife Pat.  They have two daughters and five grandchildren.  He writes humorous fantasy and scifi stories.  On occasion, he also writes an article on fiction writing or book marketing but says that writing nonfiction is like work while writing fiction is fun.  A member of the Science Fiction Writers of America, he refuses to write serious genre fiction saying there is enough of that on the front page of any daily newspaper and on the evening TV news.