Today I'd like to welcome Author Monika Pardon to the Author Spotlight. Monika recently released her book, Golden:

With her long golden hair and tragic run-in with three impossibly large bears in a remote cabin, seventeen-year-old Sonora Martin is a modern day Goldilocks. Yet her life is no happy, romantic fairy tale. Instead she finds herself thrust into a dark magical world of the fae and shape shifters and questions who she can trust.

After the sudden death of her grandmother, Sonora is forced to live with an aunt that she barely knows, her cousin, and Luke, her aunt's reluctant boyfriend. A fight with her aunt sends Sonora running into the woods where she inadvertently learns a web of family secrets and of a startlingly pact for revenge with her as the target. Now with the help of a pair of unlikely allies Sonora must travel to the Shadow Realm in search of a way to survive.

Welcome Monika! Please tell us a little about your inspiration for Golden: 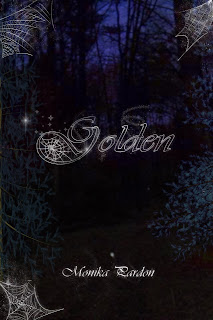 The idea for Golden came when my mother was reading Goldilocks and the Three Bears to my son while I was braiding my daughter’s hair. I was listening to the story and that’s when Sonora came into my mind and so did Ian. Luke came later. He was originally supposed to be a villain, but when I was writing his profile out (I do that sometimes with my characters), he didn’t seem horrible. That’s when my friend’s brother asked me put him in the story. Sam wanted to be evil, so that worked out well. The part for the spider web came from sitting in front of a camp fire. Everyone around me was talking, eating, and having a great time. I was looking around, and that’s when I saw a small spider web in a tree nearby. The moonlight hit the web, giving off a faint bluish-white glow. That’s when the web and the Realm came into my head.

Why do you write?

I write for myself. I love stories and my imagination is wild. It’s something that has been source of real fear, real humor, and real entertainment. After a while, I started to write things down. I never stopped.

And now the question that fascinates me, because this is something I just cannot do - Are you able to write more than one series at a time?

Jealous! So what is your writing process?

I sit down and outline. I sometimes write character notes. I write down the most important scenes on Post-Its and stick them in my notebook, so that if something needs to be changed, it’s an easy fix. Then I sit down and go for it. Usually, I have water or a Diet Pepsi with me.

My family knows that I need quiet when I write - how about you - silence or music?

I do both. I like listening to music while I write, and I make playlists. I also like quiet, but that can tire me out quicker. Generally, it’s whatever I’m in the mood for.

Do you have a favorite story that you have written?

So I have a few manuscripts that I have written within the last few years. No one has them. The first manuscript that I wrote, no one will ever see that one! For my favorite, I have two. I have a vampire one that is really creepy. Think Salem’s Lot meets Fright Night. It’s still unnamed. There is another that the idea came from two places, the Iliad (Helen of Troy) and Margret Atwood’s The Handmaid’s Tale. I wrote it while in a 20th Century Novel class where I had to read Atwood’s crazy, dystopian novel. Seriously, that is one messed up story!! Anyway, I don’t know if that one will ever see the light of day. I will say that I also love Golden. I love Luke. He’s so vulnerable, but incredibly strong at the same time. I love Sameron, and what I will say, you haven’t seen anything yet from him!

Sounds intriguing! I look forward to reading your work.  Thanks so much for stopping by! 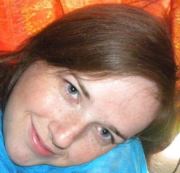 Monika Pardon grew up, the youngest of six children, in southern Maine. As a child, she constantly made up stories that entertained her family. As she grew up, she never grew out of her imagination or her fondness for story-telling. She eventually went on to college and graduated from the University of Michigan in 2006. Today she lives near Portland, happily writing her stories and reading anything entertaining that she can get her hands on. Golden is her Young Adult debut novel.

To learn more about Monika Pardon and Golden, visit her Facebook Page: http://www.facebook.com/pardonmonika

Next Week on the Author Spotlight: 8-Year-Old Ethan Rice