The Little Old Man Who Lives Behind the Couch

No - I'm not talking about the Little Old Lady Who Lived in A Shoe (you know - the one with all the kids she didn't know what to do?) I'm talking about that elusive little man of mystery who sneaks around our house doing lots of things he's not supposed to do. When I was a kid, we called him "the little green man."

Confused? Please tell me I'm not the only one with a little old man living with them. He's the guy who leaves the empty milk carton in the fridge, he's been known to leave lights on, and believe it or not - he takes the dirty laundry my children have carefully placed into their hamper and throws it back on their floors! It's true!!

I've tried to get him to identify himself, but he is very sneaky. He always comes out when I'm not around. Oddly, he doesn't seem to care if my children are around though. He'll take that last cookie without asking and then leave crumbs on the couch, right in front of them. I know because my kids have told me - so it must be true. I know they would never do such things themselves.

Sometimes, he thinks it's fun to play tricks. Like the one time my son didn't have his homework with him to hand in at school... he swore he put it his bookbag the night before, but apparently, that little old man pulled it right out and left it on his bedroom floor just before my son left for school in the morning. 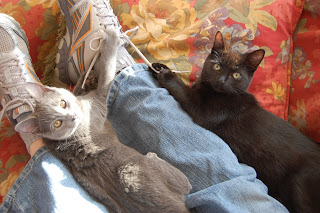 Listen up Mister - I'm on to you, so you better watch out. My spies (aka the kittens) are watching - they claim you are the one who jumped onto the counter last night and ate the chicken I had sitting out on a plate ....