Hi all – back to school is officially underway with our first full week back. I’m busy figuring out carpools and making sure everyone is on the right bus (see below), but for the most part, everyone is settling in nicely. Here’s what else has been going on this week:

1. 9/11. It is so hard to believe it has been ten years since 9/11. It just doesn’t seem like that much time has passed for me. Like most people, I can remember exactly what I was doing when it all happened. I was at work, huddled around the computer with the rest of my co-workers watching cnn.com. We were watching the live stream, expecting to see the replay of what happened. Instead, we saw the 2nd tower getting hit, live before our eyes. It was completely surreal. The rest of the day was a blur, until I went to pick up my then 4 year old from my babysitter’s house. She, like most people, had the television on. My 4 year old was sitting on the floor building towers with leggos and knocking them over with a toy car (acting as an airplane). The magnitude of the event in his little eyes was beyond apparent.

2. Birthday Party Anyone? This past Saturday was one of the most hectic days we have had in a very long time. We started out at our friend’s house celebrating their adorable identical twin boys’ third birthday. It was just a quiet and intimate party with us and twenty other 3 year olds and their families. Luckily they have a ginormous house (& hopefully a good clean up crew!) From there, we went to my daughter’s birthday party which was re-scheduled thanks to the hurricane. I got smart with her party and had it at a bowling ally. I didn’t have to do a thing other than show up and bring a cake. The kids had a blast and I was able to sit and relax. Immediately after her party, we went over to another birthday party. This time for our cousin’s two year old. What a cutie - with the most amazing smile and eyes! Our energy was sapped by the time we arrived, but it was so nice to see everyone and help them celebrate.

3. The Phone Call. Tuesday afternoon was one I would prefer not to repeat. I was waiting at the bus stop at the corner of our street waiting for the school bus to safely deliver my 5 year old from Kindergarten, when I see my daughter who had arrived home a few minutes earlier from her school, running down the street toward me. She tells me that the principal called to ask if I had picked my 5 year old up, and that they were not quite sure where he was. WHAT?! I had my cell phone on me and immediately called the school. The teacher tells me he must have gotten out of the bus line and that they are trying to locate him and will call me back. WHAT?! Several minutes later (which felt like several hours) they call to say they found him on a different bus and they were bringing him back home. Apparently he thought he heard his bus being called, and in his little mind, he thought all the buses went to our house. Not a fun afternoon.

4. Book News. – Confession time – I think my favorite part about having this book is getting notes and pictures from parents telling me how much their kids are enjoying Nate Rocks the World. I decided I wanted to dedicate a portion of my website to honor these great kids, so with their parent’s permission, I now have a “Meet The Kids” section on my website – take a peek! I hope to soon have it filled with lots of smiling faces! If you know someone who has enjoyed Nate, send me a picture! If you haven’t had a chance to check out Nate Rocks the World, there are currently a few great opportunities happening:

*For those who use Kindles, Nooks, Sony E-Readers, IPads, IPods, etc, etc, etc... Nate Rocks the World is available for just $0.99 until September 30 in honor of National Literacy Month. This offer is available only through Smashwords and only with coupon code QH26Y.

5. Blog Award! What’s better than being awarded The Versatile Blogger Award? Being awarded The Versatile Blogger Award a second time!! Thank you to my friend Amberr Meadows over at Like a Bump on a Blog. Please go visit her blog – it is awesome!! My official acceptance and nominations will happen at some point over the weekend – so stay tuned. I have to nominate fifteen fellow bloggers. If there are any you think are worthy, leave me a comment and I’ll check them out! 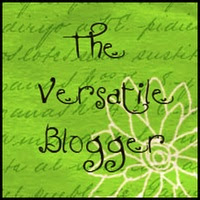 Hope everyone has a great weekend – thanks for checking in. See you next Friday... and hopefully sooner!