This past weekend, my husband and I along with the three kids loaded into the minivan and headed to Connecticut to spend the weekend with my parents. We packed light – two mega-sized stuffed to capacity duffle bags, with a couple of other assorted bags. I don’t care what anybody says –we did need it all!!

We left Friday night at 5:00pm. Have you ever been on the New Jersey Turnpike during rush hour with construction going on? It is not pretty. My husband’s thinking was that it was a beautiful Friday - most people would be leaving work early to go down the shore (no that’s not poor grammar, that’s Philly/NJ lingo. Personally, I prefer ‘go to the beach’, but whatever.)

Miraculously, my husband was right.

Let me clarify – it was not a miracle that my husband was right – it was a miracle that we did not hit any traffic – not even on the dreaded George Washington Bridge! We stopped for a quick dinner and still managed to get to my parent's house in record time.

We did hit a tiny snafu when we entered my parent's development. It is a gated community and in order to enter, the homeowner has to ‘buzz’ you in after you call them to announce you have arrived. Well, for some reason my parents had turned off their house phone... and were not answering their cell phones. For a tiny moment, I thought they were trying to tell us something, but after the sixth or so attempt of stalking, I mean calling, they finally opened the gate and let us in. (Yes we were invited ahead of time!!)

With the exception of some tummy troubles for my four-year old, we had a great weekend – the weather was perfect, the pool was fun, and as usual, Pictionary became a little crazy. Even my two oldest children got along, despite having to share a bedroom. I suggested to them on Sunday morning that perhaps we should adopt these sleeping arrangements at our house, since it seemed to be the answer to their constant bickering. The look of horror on their faces was priceless!

A highlight of the weekend was going to visit my 96-year-old Grandmother. She mixed up all of our names, asked us the same questions repeatedly and most likely has already forgotten we were there. But, none of that matters - seeing her face light up when we entered the room was the best! 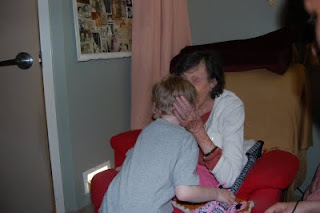