Hey everyone – this week flew by (at least for me!) Here’s what’s been going on in my little world...

1. Fever! It’s never easy having a child who is sick. But, when you have a kid who has already fought off a bout of meningitis, “Mommy, my neck hurts,” coupled with a fever takes on a whole new meaning! So I did what any crazy mother would do, I called the doctor’s office and demanded he be seen ASAP. Of course once I told my four year old our destination, he insisted he was cured. He stuck with this story during his entire examination. But, since he still had a decent fever, the doctor gave us the run down on the list of things to watch for. He stayed status quo for the day, until he woke up at 2:30 in the morning with 105 fever. Oh yeah – that doctor got woken up in the middle of the night. I love when doctors tell you to call back if the fever goes above 105 or he starts seizing – I mean - really?? Day three - still feverish, although thankfully, not as high with no further complaints of neck pain.  Poor little guy! 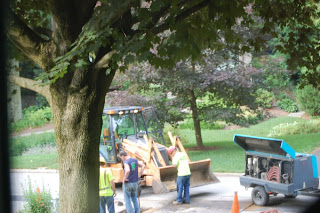 2. Construction. I was going to list the roof and the roadwork separately, but honestly, they were both equally driving me batty with noise this week. The new roof on our house was supposed to be a one-day job. It turned into a five-day, very loud job. At least no one fell off any ladders, although I do have some garden casualties from their tarps and debris. The water company, as I posted last week, is putting new water lines in our street. We have the lucky property with the fire hydrant, so we get extra noise – every morning at exactly 7am. At least it is all done now, I think. Even my 4 year old is over it – seen one bulldozer, seen them all.

3. Book News. A little delay here, a little delay there... But, it's all good, because things are still moving along with NATE ROCKS THE WORLD. I'm expecting to get look at the cover later today. I’m crazy excited and will of course give everyone a sneak peek! The rest of the interior design is expected to be ready later in the week - cannot wait - then it is off to the printer for a final proof! I have also been busy figuring out e-formatting for all the kindle/nook/sony/apple users out there. I have to admit, I’ve never used one of these devices. I still like the old fashioned way of holding a physical book in my hands, but I may acquiesce soon. In addition, I've been busy lining up interviews and book reviews. If you would like to feature NATE ROCKS THE WORLD on your own blog later this summer, please let me know.

4. Last Week of School. Finally, the last week for my two older kids!! I think I’m just as excited as they are, although I am still in denial that my oldest will be only one year away from high school! In reality, they ended last week, but I guess since we had quite a few snow days, there are hours to make up. This last week actually is more like transition into summer – they have field trips, color war, assemblies, and the dreaded cleaning of the lockers. I think both kids really had great school years, with a lot of discovery, learning, new friends, and growth (especially my 6’3” 13 year old!) Thanks to the teachers and staff for another successful year!

5. Dance Recital. I will no doubt, talk about this next week, as the actual recital is on Saturday. However, the week before the recital is definitely post worthy since it is, as my parents would say – meshuga. My daughter is in eight dances spread over two back-to-back shows. That means, there are many costumes that need to be organized with appropriate accessories: hair decorations, shoes, tights, makeup and other assorted items, including the black and white wristbands my daughter just informed me YESTERDAY that she needs for TOMORROW. I also have yet to sew the straps on one of the costumes. Big giant YUK. Then there are all the hairstyle/makeup changes I have to remember and get right. And the schedule - - trying to figure out what dance is when and how many dances we have in between her dances to change everything out. In case you couldn’t tell, “meshuga” means crazy & then some. But it’s all worth it!!


Hope everyone has a great weekend – thanks for checking in. See you next Friday... and hopefully sooner!