Is There Such A Thing As 'Laundry Closure'? 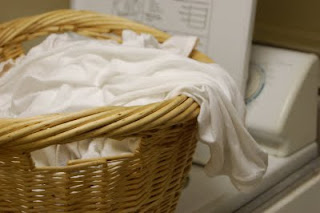 I should be folding laundry, but I decided to write about it instead.

Last week, I wrote a blog post about my son’s room and how I was happy that he had removed all of his clothing off of the floor, even if he did just throw them in the hamper instead of putting them away. Well I take that back. Silly me, I thought the clothing he had thrown in the hamper were clothes he had actually worn. I didn’t realize that these clothes were in fact, last week’s clean and folded laundry that never made it onto hangers to begin with – clever teen – I’m on to you now!

My first thought was to put them all back in his room and have him put them back away – properly. Except now they have been sitting in the hamper amongst 13-year-old boy dirty socks and underwear for several days. Even I’m not that mean. So I washed everything – again. And this got me thinking about laundry.

Let’s assume for a moment, that my kids only put their dirty clothes into the hamper ...

...sorry about that, I got lost in a little fantasy there. Anyway, back to reality:

Would that really change anything? There are five of us in this house. Between work, sports, the gym, sleep clothes, wanting to get comfortable after school/work, and other activities requiring uniforms or other types of outfit changes; there are at least two wardrobe changes per person, per day; and many times more. Let’s say only 50% of those clothes mentioned actually need to go into the hamper. That's still is a lot of laundry!

On any given day, if you walk into my house, you can be guaranteed of at least one or more of the following things - there will be:

(notice I don’t list clothes needing ironing. That is because I don’t iron. Let’s move on.)

So my question today: Is there such a thing as laundry closure? After doing laundry for the past 20+ years, I sadly have to say: No! Even if I were to get all of the clothes washed, dried and folded the moment they were ready; it would only be a matter of seconds before something else would get thrown into the hamper.

It is sort of ironic, You spend the first two or three years trying to get your kids into underwear, the next six years trying to convince them they need to change it everyday, and the next several years complaining about washing it.

So what ever happened to all that extra laundry I had to do as a result of my oldest’s attempt to *clean* his room? Oh I did his laundry, but I showed him how. AND now that I know he is capable of doing his own laundry, guess what his new chore is? Mom wins...for now.