Hi everyone – hope it has been a great week. For me – busy as usual. Here’s what’s been on my mind:

1. MAC! After much anticipation, my MacBook Pro arrived!! I’m in love! I can’t believe how easy it was to set up (thank you hubby!) I had my software loaded and was already using it within minutes. The thing I love most is how quickly it starts up and loads programs. The old computer took forever. In the morning, I would have to turn it on – go make coffee – then come back click the icon to login – fix breakfast – then come back & click the firefox icon – go pour my coffee – and maybe then it would be ready. I also love the back lit keyboard & the fact that I didn’t have to wait for it to search for drivers when I plugged my printer into it for the first time. I just started printing (imagine that!) I did have to get used to the smaller screen (I went from a 15” to a 13”) but it is so easy to zoom with just a finger swipe, that I don’t even miss it anymore. I do have some keyboard complaints though – if anyone knows a solution, I will be forever grateful:
-First – how do you delete forward? On my PC, there were two options – the 'backspace' key deleted backwards & the ‘delete’ key deleted forwards. The Mac only has a ‘delete’ key & it deletes backwards only. Totally keeps messing me up!
-Second – how do you select a block of files? On my PC you clicked on the first file, then clicked+shift on the last file & all the files in between were selected. Cannot figure this out on the Mac.
I will say, that my two complaints are not deal breakers – definitely much happier with my Mac. Now if it lasts more than 2 years, I will be thrilled!

3. Cats I have two & they are both old (17 & 18). The 18 year old (my little black kitty), is not doing well. She has thyroid issues and when I took her to the vet, her heart and kidneys were not healthy. She was emaciated at only 4lbs. We decided to 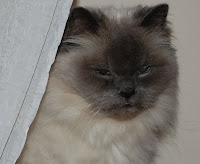 try some medication. After just two weeks, I am so 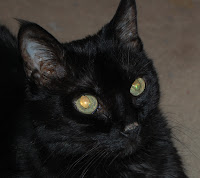 happy to announce that she has gained .6 of a lb, and her heart rate and kidney levels are back to normal. I realize that she is at the end of her lifespan, but it is just so hard letting go. I have had her since she was 4 weeks old. She was abandoned and I had to bottle feed her until she was big enough to eat food. We have been through a lot together. She goes back in two weeks for another checkup.

4. Book Update Another exciting week. My cover designer presented me with some rough comps based on the drawings that I had done myself (old cover). All I can say is WOW – she really nailed it. While my picture was cute, it definitely looked amateurish. We had a great conference call and things are moving along as scheduled for a July release date. Thank you Deana at BookStarter for bringing my vision to life (& no you cannot see the drafts....)

5. Having a Teen I have written a lot on this subject over the past few weeks. Somehow, with the blink of an eye, my first-born became a teen; leaving me - the mom who always felt somewhat confident about how to parent my young children, without a clue. Suddenly there were attitudes, cellphones, needs for independence & girlfriends (yikes!). Last night, in my attempt to adjust to having a teen, I let him walk (with a friend) to a carnival after dinner to meet some other friends (including above mentioned *gulp* girlfriend.) The carnival wasn’t far, but it was on a main road and it was at night. He had his phone, some money and his friends. I told him to be home by 8:30, as I did not want him walking home in the dark. It turned out all his other friends were allowed to stay out until 9:00. I was expecting an argument, but instead he just said, “OK.” He followed instructions and came home safely exactly at 8:30. Maybe this won’t be so difficult after all... yeah right!

One other thing I've been thinking about - the storms and tornadoes. Please keep all those affected in your thoughts and hearts. If you are able to help, The Red Cross is one of many organizations collecting donations. Thanks!
Hope everyone has a great weekend – see you next week (& hopefully sooner!)