I live with a die-hard Philadelphia Phillies fan. For those who have seen the movie ‘Fever Pitch’ starring Jimmy Fallon, you know who I mean. Case in point - my youngest son shares the same name as one of the Phillies’ starting pitchers. Now admittedly, I have always liked his name, but I can’t say for sure that my husband would have so readily agreed if say, The Yankees, had someone on their team with the same name. If fact, 3 of our top 4 names for my son happened to be names of starting Phillies…coincidence?

My wedding anniversary was this past weekend. My husband had a ticket to the first game of Phillies play-off series for that night. Had our friend not had an extra ticket, we would have spent the night apart. Would I have been disappointed? Yes. Would I have been surprised? No. My husband has had the same Phillies season ticket package with the same group of people long before I ever came into the picture, and post season games are serious business! The night also happened to be my husband’s birthday (I won’t say how old, but it is a milestone year). So, I did what any good wife would do – I threw on my Phillies sweatshirt and baseball cap and headed off to the ballpark for a romantic evening with 45,000 other people.

Sadly, the Phillies did not win.

The next day, a few of our friends who were also at the game came over to our house to analyze the game.

The reasons The Phillies lost were numerous:

-one guy who always ate salted pistachios at every winning game, had switched to unsalted - or was it the other way around?

-another friend of ours who claims that every time she watches the game on TV they lose, had inadvertently turned on the TV.

-my husband blamed it on his Hamels jersey - apparently, wearing it keeps the Phils from winning.

-somebody even implied that the Phillies had won every game until I had attended!


The only thing that didn’t come up, was that maybe the Phillies didn’t play at their best… yeah I said it. However, if my husband feels that shaving off his ‘play-off’ beard will help, I’m all for it! 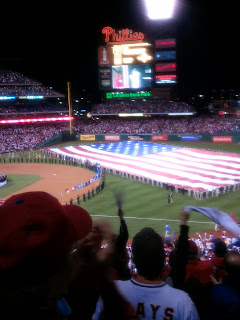 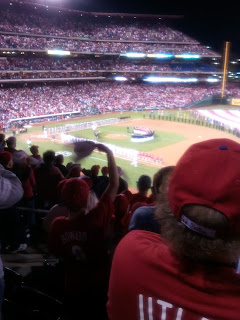 All in all, the weekend was still great, I got to spend my anniversary with my husband, we have a fun get together on Sunday and the Phillies wound up winning their second game....must have been my Pesto Chicken - - Go Phils!
Posted by Karen Pokras Toz at 11:16:00 PM